“On just one day, 92 women and 75 children were turned away from refuge”: Women’s Aid releases Annual Survey 2015 statistics

“The situation for domestic abuse survivors and their children in England is dire, and their access to vital services is dwindling. On just one day in 2015, our Annual Survey found that 92 women and 75 children were turned away from refuge. For nearly half of these women, it was because there was not enough space for them. This is a snapshot of the crisis. We need decisive action from our leaders, and we need it urgently. An average of two women a week are killed by a partner or ex-partner in England and Wales. We urgently need more investment in domestic abuse services, which is compounded by the fact that more women are disclosing their abuse – and this is just the tip of the iceberg.” 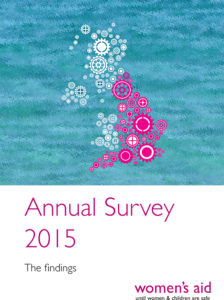 We asked services questions about their provision and service users over three main time periods:

Women’s Aid is the national charity working to end domestic abuse against women and children.  Over the past 40 years, Women’s Aid has been at the forefront of shaping and coordinating responses to domestic violence and abuse through practice. We empower survivors by keeping their voices at the heart of our work, working with and for women and children by listening to them and responding to their needs. We are a federation of over 220 organisations who provide more than 300 local lifesaving services to women and children across the country. We provide expert training, qualifications and consultancy to a range of agencies and professionals working with survivors or commissioning domestic abuse services, and award a National Quality Mark for services which meet our quality standards. Our campaigns achieve change in policy, practice and awareness, encouraging healthy relationships and helping to build a future where domestic abuse is no longer tolerated. The 24 Hour National Domestic Violence Helpline on 0808 2000 247 (run in partnership with Refuge) and our range of online services, which include the Survivors’ Forum, help hundreds of thousands of women and children every year.

For all media enquiries please contact our press office