16 Days: Strength in number and unity – over 40 years of tackling domestic abuse

Strength in number and unity: over 40 years of tackling domestic abuse

For Day 5 of our 16 Days of Activism blog series, actor and Women’s Aid Ambassador Bill Ward shares how researching for a role opened his eyes to the extraordinary work of our grassroots movement.

I first came across Women’s Aid when I was researching a Coronation Street storyline about domestic abuse a few years ago.  I’ll be honest: I really didn’t know very much about them –  to my shame I knew very little about the subject area full stop – but their helpfulness and support with my research opened my eyes to the extraordinary work they do, and what they have achieved in the 41 years since they began.

So. Women’s Aid grew out of the women’s liberation movement of the late 1960s and early 1970s. As women came together, it became clear that domestic violence was rife within society.  Astonishingly, it still is. Women’s Aid was formed as a collective, grassroots movement, and this is still its ethos: that there is strength in number and unity.

The first Women’s Aid Federation was set up in 1974. It was the first domestic abuse organisation to unite almost 40 refuge services across the country, and provided practical and emotional support, as part of a range of services, to women and children experiencing domestic abuse.

Jo Sutton, a social work student, was the first national co-ordinator of Women’s Aid, and Jalna Hanmer chaired the very first meeting. For the first time, there was a national body to co-ordinate the campaign for new laws and policies, and to improve support for victims. Women’s Aid still operates like this today – but now as a federation of over 220 organisations.

Many of the women who came together to form Women’s Aid  in the 1970s were themselves survivors; they had fled domestic violence, often with their children, and had to fight to establish somewhere safe for women to go. In some cases, they literally squatted in a building to found a refuge.

This meant that these women truly understood what other victims needed when they came for help. They were experts – and this philosophy prevails today. Women’s Aid services are still often staffed and let by survivors of domestic violence. They help hundreds of thousands of women and children experiencing domestic violence every year, through more than 300 lifesaving services across the country.

Women’s Aid today – just like Women’s Aid in the 1970s – keeps the voices of survivors at the heart of everything they do. Their campaigns and policy work are shaped by what members of the federation and survivors highlight to them as being the key issues – such as funding for refuges, and criminalising controlling behaviour. They focus on women and their children being able to recover from domestic abuse, and achieve lasting stability and independence. 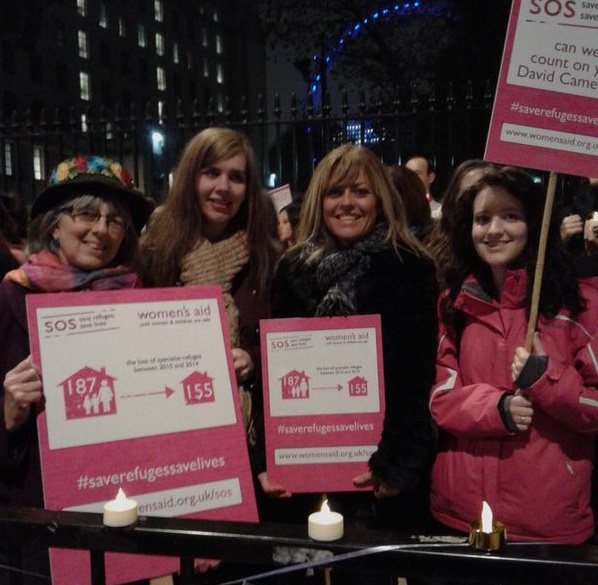 Let’s not forget that the services they provide are literally lifesaving. Without Women’s Aid, there are women who would have been killed, or never escape their abuser.

This is why Women’s Aid in 2015 is just as vital, innovative and inspiring as Women’s Aid in 1974. Domestic abuse – be that emotional, physical, financial, sexual – is still appallingly common.

On average, 2 women a week in England and Wales are killed by a partner or ex-partner.

This is why Women’s Aid needs our support.  There is a long way to go before we have eradicated domestic violence – and Women’s Aid are leading the way to do that.

How you can help

Sign up to make a regular gift to Women’s Aid today, and help us to reach more women and children living with domestic violence with our life-saving services. We believe that everyone has the human right to live in safety, free from violence and abuse. Your gift will also support our work with policy makers, professionals, schools, and communities to prevent domestic abuse in the future. Women’s Aid started working with Bill Ward in 2004 on a domestic violence storyline for ITV soap opera, Coronation Street. Following a great deal of research for his character, perpetrator of domestic violence Charlie Stubbs, Bill joined Women’s Aid as an Ambassador, to further raise awareness of the cause.